I had been thinking of visiting Paul Cézanne’s studio for a long time. https://en.wikipedia.org/wiki/Paul_Cézanne

Visiting an artist’s working place is always an intimate experience, but when it is the studio of a visionary who had an impact on generations of painters, it is also very moving.

Paul Cézanne’s life-long research in painting, his determination to find his own artistic vision is impressive. This was a man very rooted in his native Provence, who had gone to Paris, (as every painter did then), in order to establish his career. However, neither him nor his vision fitted in the city’s sophisticated society. He came back with a resolution to “astonish Paris with a few apples”, meaning to bring about a new vision of painting that would reveal the structural basic volumes of things and beings, be it apples, landscapes, or even the human figure. Cézanne was reacting to the Impressionnist’s ephemeral depiction of nature. He wanted to express more than light and color, he wanted to reveal the very essence of things.
And astonish Paris he did, though very quietly during his lifetime, being slowly noticed near the end of his life by a few young painters in search of a fresh vision. His art influenced generations of painters, primarily the generation after him, namely Picasso and Braque, in their cubist period, Matisse and Léger, among others. 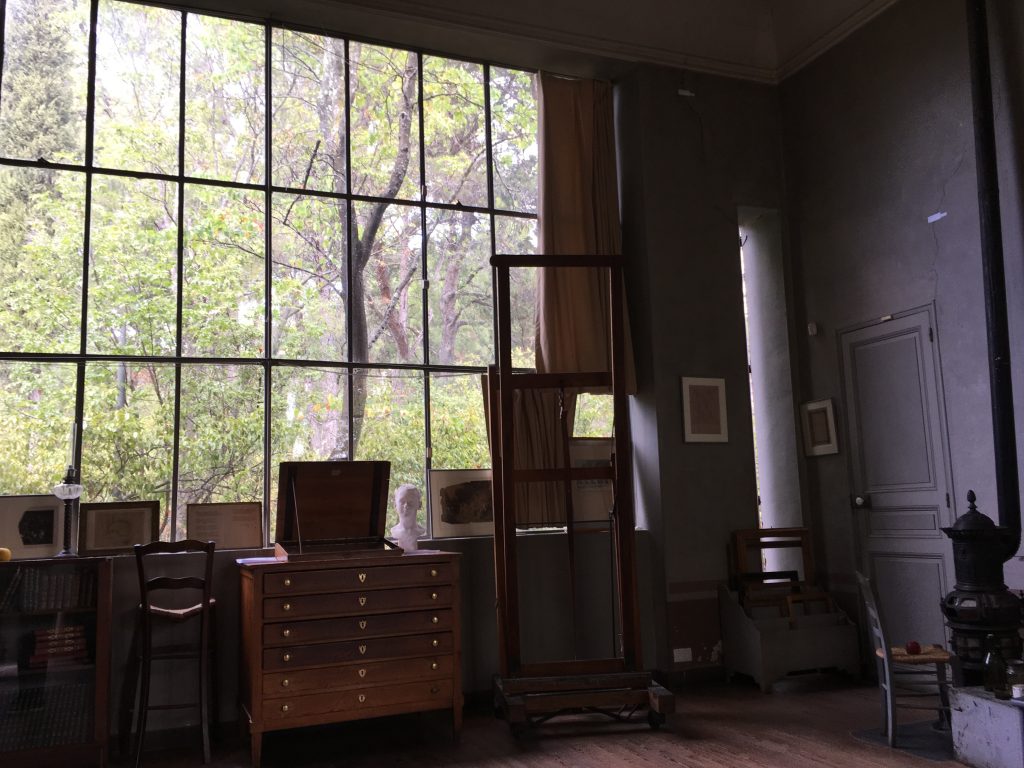 Cézanne built this studio in 1900, only 6 years before passing away. He designed it so he could control the light and heat from the intense sun, with the large window opening to the north, the smaller windows facing south with shutters.

The view to the north was of a hill facing mont Sainte-Victoire, the view to the south towards Aix-en-Provence. Trees and construction have since obstructed those original views.

At the right of the big window, there is an opening in the wall: this was to allow the painter to slide big works like his « Baigneuses » outside, so he could look at it in daylight, his gardener/model holding it for him.

Here is why, in his own words: “When I judge art, I take my painting and put it next to a God made object like a tree or flower. If it clashes, it is not art.”

So how did it feel for me to be there? Understated and moving. Understated because nothing has changed since Cézanne died of pneumonia on October 20th, 1906. Nothing was added to make his studio appealing, and nothing was touched, not even his hats and coats on the hangers. Even the paint on the wall is the same.

Moving because one can feel his spirit, almost grasp his struggle with the objects that composed his world, a mixture of dusty artist materials – the paint, brushes, vases, tablecloth, images and books that inspired him.
Nothing has changed except for the fresh apples bringing a fragrance to the place…

…And the young lady who guided us in that very 19th century setting, now absorbed in a very 21st century occupation.